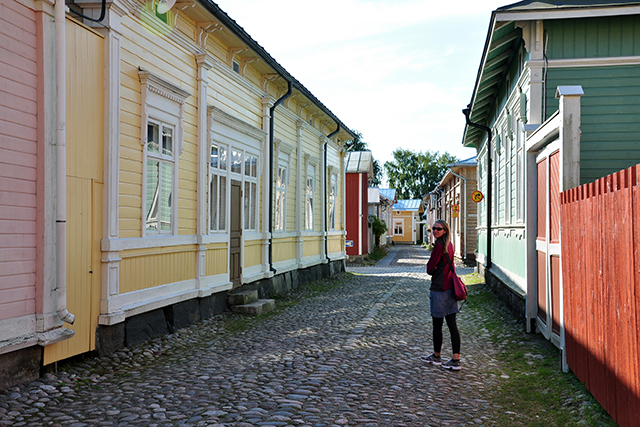 Last week the weather had been perfect, and we were itching to get out of town. A family joke is to make a note of UNESCO World Heritage site visits, so when initially researching day trips in the area, I came across Old Rauma and I knew I had to go. The old part of town is listed as a World Heritage site and is (probably) easily accessible from Turku on the bus.

END_OF_DOCUMENT_TOKEN_TO_BE_REPLACED 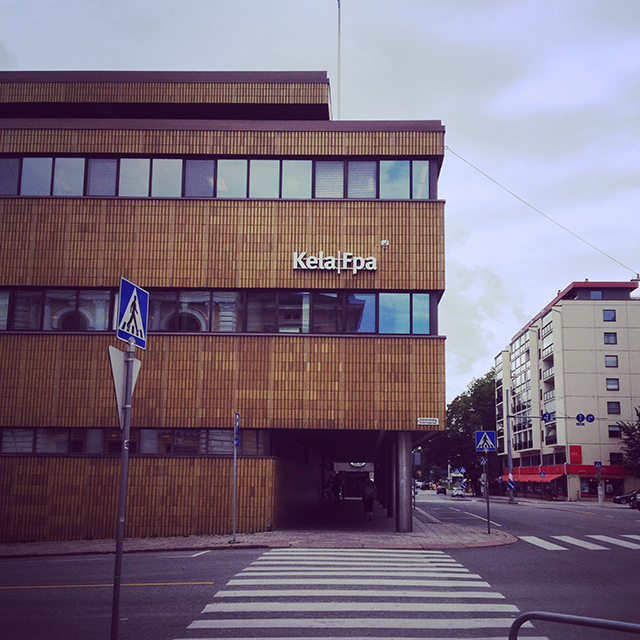 Just when I thought that my paperwork and bureaucratic processes was coming to an end…ug. The first day I was here, I applied for social insurance at the Kela office in Turku as a spouse of someone who was eligible. The application was straightforward and I wasn’t worried. But yesterday, exactly a month later, I received a  letter in Finnish denying my application. Thanks to some google translate and our supervisor at the university we figured out it was because we hadn’t registered our marriage in Finland. This all comes down to the apostille. Remember that?

END_OF_DOCUMENT_TOKEN_TO_BE_REPLACED 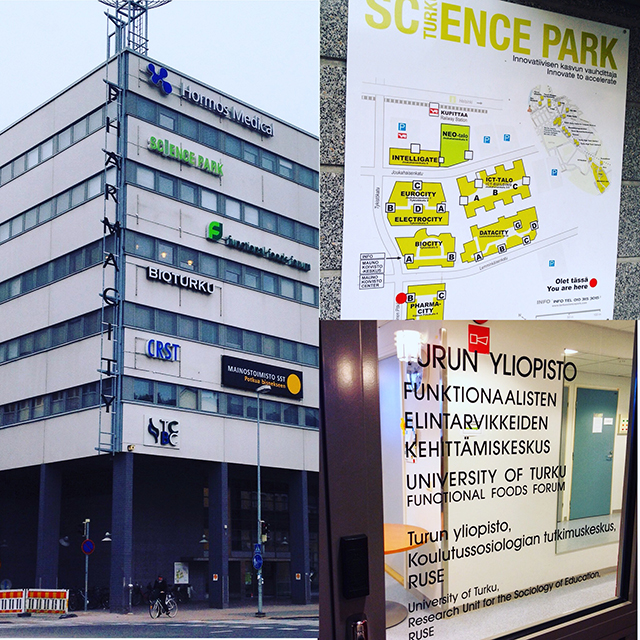 My new position is with the Research Unit for the Sociology of Education (RUSE), which is part of the University of Turku, which is within the Pharmacity building, which is part of the Science Park in the city of Turku. Got it? Good. The office is in a mixed building, with some private offices and other research groups affiliated with the university but not a classroom-type building. However, I am super curious as to what goes on at the Functional Foods Forum down the hall!

The office building is called Pharmacity and is part of the Science Park, not technically part of the main campus of the university but close by. I did have to negotiate campus to get my university logon and a key to the building and wandered around like many other students during this first week of school. This part of the city feels more like a central business district than the main city center, which is more shopping and restaurants around the square. Science Park feels more like where people work instead of play. Now including me! In addition to the keys and logons that I was able to get on campus, I also had to get a tax rate calculated by a municipal tax office (helpfully close to Pharmacity) using my contract which is very different than the US system. It took about 25 minutes of waiting and about 2 minutes of actual calculations and official paperwork which I then had to turn into someone in my office.

I’ve spent the last two days working with data in Excel, so nothing to really write home about but still fun nonetheless and I always enjoy being part of a team. The walk from our apartment is about 15 minutes or so and the most important thing is to try to not get hit by a bike. :O 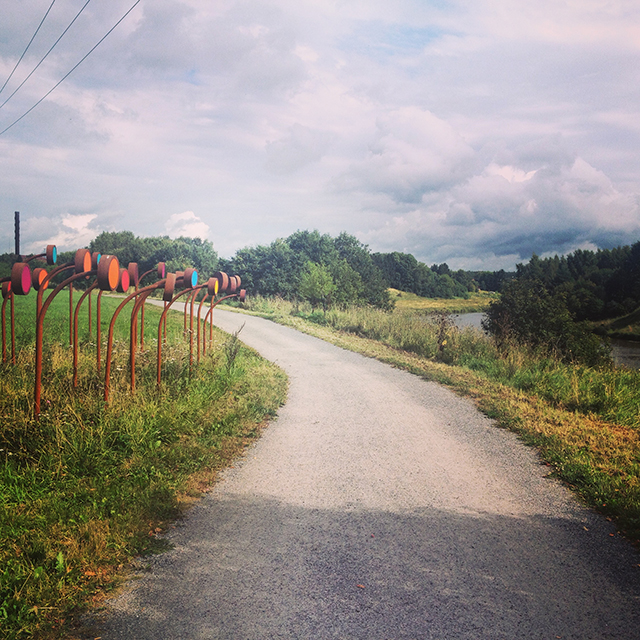 One of the first things I did when we moved here was search for a running route. I don’t need variation or even dramatic sights. I do need something that I can vary my distance and that I can start running once I walk out my door and punch the button on my watch. I don’t want to take a bus or the metro somewhere to run. In Montreal I spent a lot of time running a very urban path even though I circled several parks. While I am not exactly running in the country here in Finland, the path along the river feels rural especially compared to crossing Rue St. Laurent at mid-day. I haven’t quite been here a full month and already I love this route and I can’t wait to see it in different seasons. The river here is similar to parks in Montreal, in that it is really the heart of the city where people go and hang out to read or socialize, and not something you visit just when friends or family are in town visiting. If I turn left at the river, I am in the city center in just two minutes. But if you turn right, you can quickly be at a spot like above that doesn’t even feel like a city. Not a day goes by that I don’t make one turn at the river or another.

END_OF_DOCUMENT_TOKEN_TO_BE_REPLACED 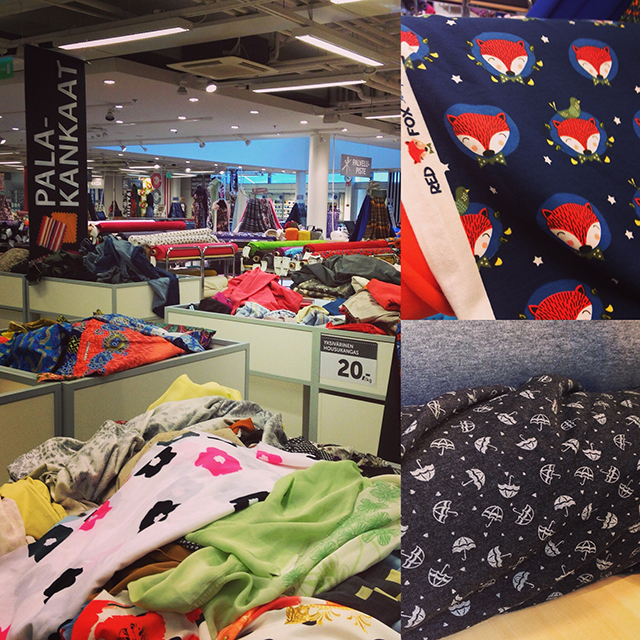 Further internet exploration led me to Eurokangas, a fabric store on the 3rd floor above my regular grocery store in the city center of Turku. From their website, it looked like mostly home dec fabric, which there was a lot of, but this store is really amazing. They have a huge selection of apparel fabrics, including fancy bridal and formal fabrics, but also some clearance fabrics starting at 20 euros a pound, significantly more expensive than Jätti-Rätti, but still a pretty good deal. Out of all the fabric on bolts there, I was drawn to the amazing selection of printed jersey knit, which I have almost no experience sewing with. But on my sewing bucket list is a jersey knit dress and the patterns were soooooo cute (foxes! tiny umbrellas!) that I was really tempted. The price was about 12 euros a meter, but the width was wide. I don’t normally buy this type of fabric, so I am not sure if this is a good price or not.

END_OF_DOCUMENT_TOKEN_TO_BE_REPLACED 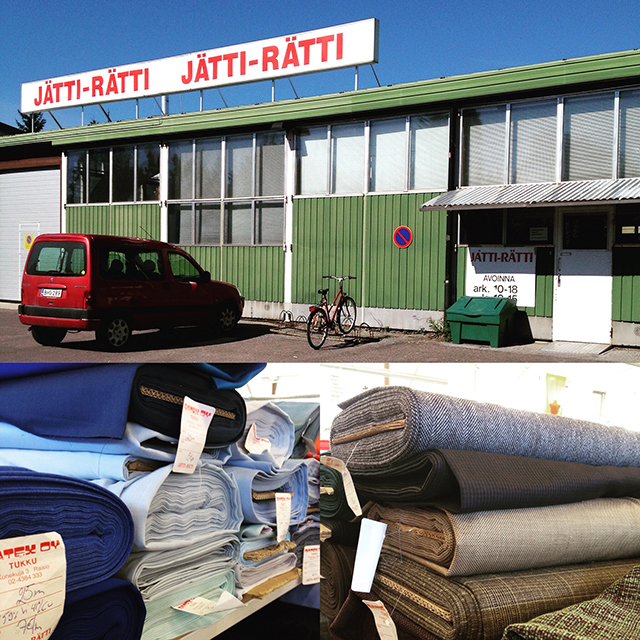 Other than the beautiful and expensive Marimekko fabric, and the usual stuff at Ikea, I haven’t run into much in terms of fabric/yarn/craft stores in the Turku City center. Some quick internet searching doesn’t turn up much either, but I did come across Jätti-Rätti online, which I think translates to Giant Tatters or something like that. It was about a 10-15 minute bike ride from my apartment, but on a bus line as well. I didn’t know what to expect based on the website, and the street and building had an unassuming light industrial/warehouse feel. Don’t be fooled! This place was amazing! Not tons in the way of quilt fabric, the emphasis here was more on apparel and home dec fabrics, but they have a little bit of everything, including notions and materials for rug making.

END_OF_DOCUMENT_TOKEN_TO_BE_REPLACED

Trying to get in a little more local sightseeing while the weather is still nice. Turku is small, and most travel sites about Finland focus only on Helsinki (or northern lights trips up north). Tim and I haven’t really hit the museums yet, but wandering around new neighborhoods and visiting churches has proven to be a really lovely way to spend the afternoon.

And let me tell you that St. Michaels is one of my new favorites. It isn’t super old, it was completed in 1905 and the neighborhood around it is all busy streets and really unremarkable buildings. But approaching the church is pretty dramatic. The church rises up on a grassy hill, completely dominating its own block. The exterior is striking, with huge spires and giant pointy gothic revival arches and windows. Getting a good picture of the whole thing is surprisingly difficult, especially with the busy streets and construction surrounding the block.

END_OF_DOCUMENT_TOKEN_TO_BE_REPLACED 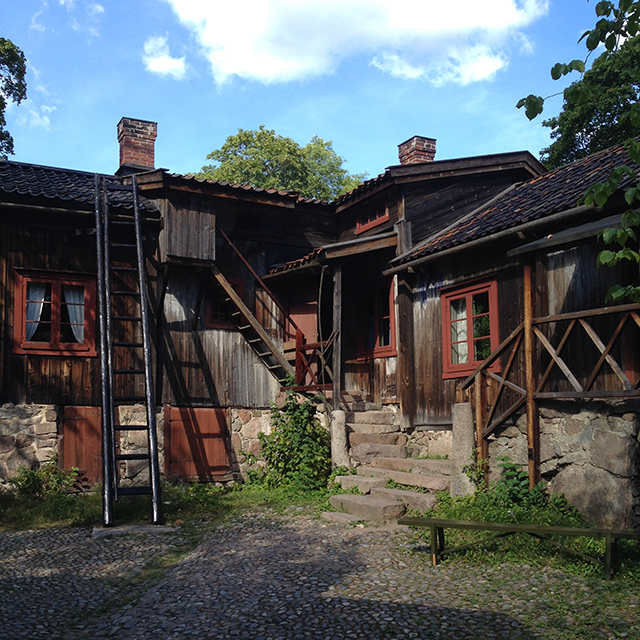 The Luostarinmäki Handicrafts Museum is just a short walk from the busy city center, but feels like another world once you step inside. The wooden cottages were built on this site in the late 1700s and early 1800s as work and living spaces. The Great Fire of Turku in 1827 devastated 75% of the city, including the historic downtown but the Luostarinmäki site and cottages were spared.

END_OF_DOCUMENT_TOKEN_TO_BE_REPLACED 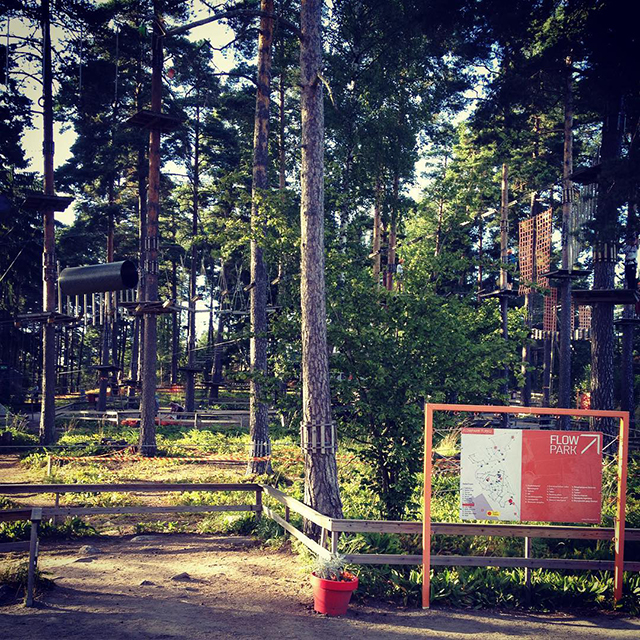 Friday afternoon a research assistant at the University suggested we all go to Flowpark Turku for some end-of-the-week fun. This small park is tucked between a busy road and a shopping mall but never felt like you were in the middle of the city once you were there.

The concept is that you sign a waiver, put on a harness and helmet (provided of course), get a few minutes of instruction on your carabiners and how to always be attached to something, have a brief test with a staff person and then are let loose in the park. Climbing routes were marked with difficulty levels and you could pick wherever you wanted to go without waiting for a group or further instruction which was really nice. It helped that it wasn’t too busy – so no waiting for routes to open up and no one waiting for you to finish an obstacle.

END_OF_DOCUMENT_TOKEN_TO_BE_REPLACED 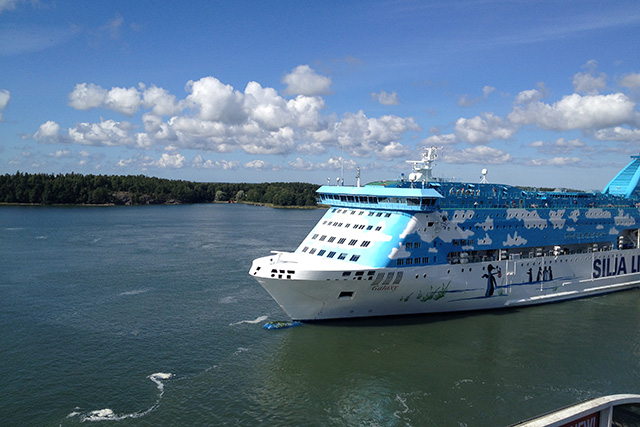 The research group that Tim is working for at the University scheduled an all day conference on a cruise. Turns out that it is as cost effective as reserving another space and ordering in catering for two meals, teas and snacks for five people. I joined as a possible future member of the research team and was introduced to the project.

We left the Turku harbor at 8:15 in the morning on the ship above. Maaaaybe 50 people were on the ship, so it seemed pretty empty. We had buffet breakfast, took a quick tour of the ship and settled into one of the conference rooms downstairs. Turns out watching islands float past is pretty conducive to a productive meeting. What a beautiful place to get inspired by!