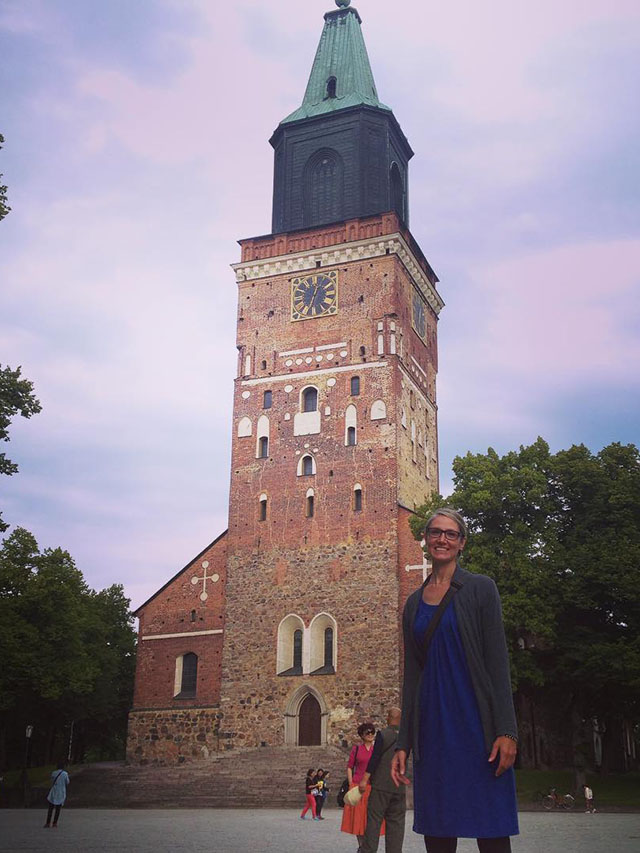 So much time has passed and so much has happened. I still want to record what has been going on and daily life in Finland. A quick recap: I left Montreal on June 22 and drove two very long days with my cat to Colorado. The movers came the next day while Tim was still in MTL and packed up our stuff. Tim then left for a conference in Istanbul on June 25. He then traveled directly to Finland and has been here since early July.

Colorado was a blur, busy with family activities and also trying to get organized regarding the move. The car was complicated to figure out what to do with in Canada and proving to be a pain to get it re-registered now in the US. We are currently waiting for a title (we had to surrender our US title when we registered the car in Canada, which in retrospect we should have never done). I purchased a new suitcase and some clothes to take too. I left my sewing machine at home, so planned for some more portable knitting projects as well. It was really nice to spend time with my family and meet up with old friends as well. I traveled to Minneapolis for a wedding and reunion with my college friends and went camping with a family I’ve known my whole life. My aunts and a few cousins also made the trip and we spent some time at a cabin in Tin Cup Colorado which is amazingly beautiful. If anyone asks you if you want to spend time around the Collegiate Peaks area in Colorado, the answer is yes. Go there.

And then before I knew it, it was August 4 and I finished packing my stuff and left Denver for Helsinki via Iceland. Two flights and a bus ride later, I was finally in Turku. The photo above is me the first night I arrived, super sleepy but crazy hungry too. We went out for fish and chips, which I devoured.

My first week in Finland was mostly marked by the worst jet lag ever. 9 hour difference is hard to make up and I spent a few nights with 1-2 hours of sleep. I forgot about melatonin, and started taking it maybe too late, but have finally after well over a week adjusted to the new time. Sleep is a precious thing and without any, I felt not just tired but physically sick.

Since then I’ve had fun. We’ve explored restaurants, pubs, shops, and some sights. I’ve been to an island off the coast where I picked wild lingonberries, blue berries and strawberries in the forest. We also hunted for wild chanterelles. I’ve eaten a ton of salmon and had good beer. I turned 40 and finally submitted my apostille to the magistrate’s office. I applied for Kela, the social insurance and gotten added to Tim’s bank account. I visited the library and checked out books with my new library card. We’ve socialized a bit and are generally having fun. I will post longer on some of these aspects of living here. I mean you want to know what a grocery store is like, right? 🙂 I’ve also been to Ikea, because of course.

The weather has been perfect and we are able to take advantage on our balcony of our perfectly situated apartment. Photos will come, and more details will come. Sooner rather than later, I promise.